As you may well be aware, we are working with the SEA LIFE Trust to create the world’s first sanctuary for captive whales, and later this year, two beluga whales, currently held in an aquarium in Shanghai, China, will be flown to their new, more natural sanctuary home in a bay in Iceland. Last week I had the pleasure of visiting our sanctuary transport partner, Cargolux Airlines in Luxembourg to see for myself what’s involved in bringing two whales home to the ocean.

Cargolux’s business is air freight and they have donated the use of one of their incredible 747 aircraft to transport the two belugas, Little Grey and Little White, from China to Iceland. This really is a generous donation – to charter such an operation would have cost the project a considerable amount of money.

My colleague, Helen and I were the guests of Cargolux CEO and President, Richard Forson and his team at their headquarters and European hub within Luxembourg Airport. Also at the meeting were our colleagues from the SEA LIFE Trust.

Arriving at the Cargolux offices and maintenance hangar we were met by the sight of the biggest building in Luxembourg, home to the majority of Cargolux’s maintenance team servicing its fleet of 747s. On the tarmac was the actual aircraft that is going to transport the two belugas on their historic flight to sanctuary.

Every time we make a decision in this project, the welfare of the two whales is our priority consideration. We need careful planning to make sure that the flight is as comfortable as can be for them. This meeting and subsequent discussions allowed all three project partners to talk through the final planning for the transport operation and to consider factors such as aircraft pressurisation and how to avoid taxiing delays at Shanghai.

The two main pilots scheduled to make the sanctuary flight were only second in their enthusiasm for the project to that of Richard, Cargolux’s CEO.

Richard shared with us his extensive knowledge of wildlife and his understanding of environmental issues. We were especially impressed to hear of Cargolux’s commitment to the wider environment, with its history of purchasing fuel efficient and quieter aircraft for its fleet even before the various regulatory frameworks required it do so.

Richard also restated Cargolux’s commitment not to transport live whales, dolphins or other animals for zoos or aquaria unless for sanctuary projects such as ours or as part of reintroduction and breeding programmes that seek to enhance conservation efforts for wild species or populations.

It’s been some twenty years since WDC and Merlin Entertainments first sat down to develop a vision of how the captive display of whales and dolphins could and should end, and what would be needed to help those whales and dolphins stolen from their families and imprisoned in dolphinaria.

That vision is now nearing an important milestone with the completion of the world’s first ocean sanctuary. The two whales are currently doing well in Shanghai. They are being prepared for their journey and for their eventual release into their new ocean home later in the year – for example, they are being acclimatised to being moved in a sling so that this is not too stressful for them when the big day comes and they are putting on weight and blubber so that they can thrive in the colder Icelandic sea water that belugas are more naturally suited to.

I’m extremely proud that WDC are partners in this world’s first, and I’m excited to be working with the SEA LIFE Trust and Cargolux to give Little White and Little Grey a happier life. This project firmly marks the beginning of the end for exploiting whales and dolphins for human ‘entertainment’.

We’ll be keeping you up-to-date here on the website, through your monthly email newsletter and through social media as the project unfolds.

And remember, this sanctuary would never have been possible without your support. It just shows what a long-term commitment can mean, so thank you again, to all of you who have stood by us.

With your continued support, this will be the first of many more sanctuaries that will be needed for the 3,000-plus whales and dolphins still suffering in captivity. 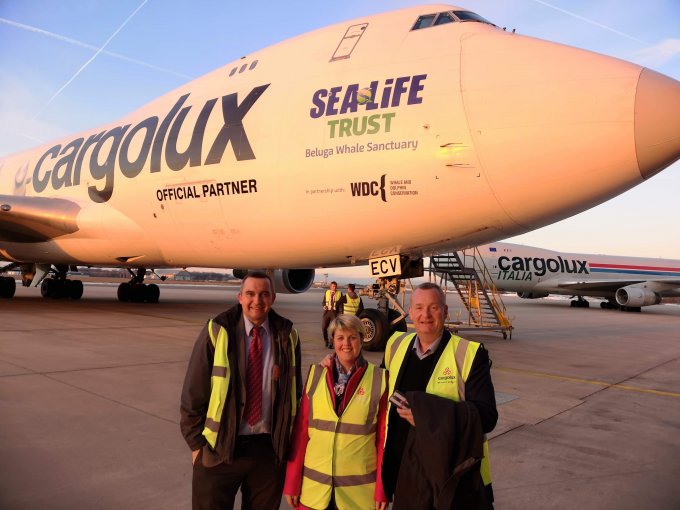 What can you do?

Whales and dolphins continue to be captured and imprisoned in marine parks around the world for one reason: they make money for big corporations. Help fight for whale and dolphin freedom today.

If you'd like to make a donation to help fund our work to end captivity forever, we promise to put it to work straight away.

There are more than 3,000 whales, dolphins and porpoises held in tanks. If we want an end to captivity, we need to find somewhere for them to go. Find out more about our ground-breaking work to create the first beluga whale sanctuary in Iceland.

View all posts by Julia Pix →