Large sharks prey on dolphins, they particularly target very young calves and sick adult dolphins as these are the weakest and most vulnerable individuals. Sharks are major predators of dolphins in some parts of the world such as the Sarasota, Florida community, where one third of the dolphins have scars from shark bites, and dolphins living in coastal waters in Australia.

The main advantage dolphins have against shark attacks is safety in numbers; they stick together in pods and defend one another from a shark’s attack by chasing and ramming it. Dolphins are able to protect vulnerable members of their pods and extended families such as young dolphins and injured or sick dolphins. Dolphins use their strong snouts as a powerful weapon to ram sharks, targeting their soft underbellies and gills to cause injuries.

Sharks pose less of a threat to larger members of the dolphin family. Indeed, orcas are the top predator in the ocean and small sharks are a target for some populations. Orcas will even attack and kill great white sharks just to eat their livers which are a high energy food source. 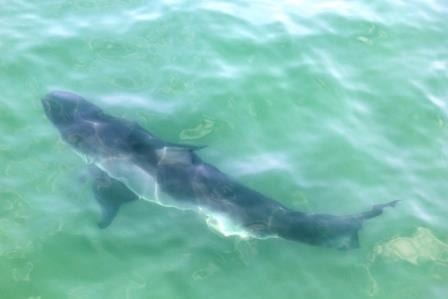