Since 1999, WDC has been conducting a research project studying the whales, dolphins and porpoises (cetaceans) occurring along the north-west coast of Wales in the waters around the Llŷn Peninsula and Bardsey Island.

Bardsey Island contains important habitats for a number of European Protected Species under the Habitats Directive, most notably harbour porpoises (Phocoena phocoena), bottlenose dolphins (Tursiops truncatus) and Risso’s dolphins (Grampus griseus), the latter also being of principal importance in Wales under the Natural Environment and Rural Communities Act 2006 (NERC Act). Risso’s dolphins are typically found in deeper offshore waters where they feed on squid. There are a few sites in the UK where they can reliably be observed close to land. Bardsey Island is one of these locations.

The Bardsey Island study is a mixture of land- and boat-based surveys where observers either note down sightings of cetaceans from fixed clifftop positions, or take ID-photographs of dorsal fins from small boats (under licence from Natural Resources Wales). As each Risso’s dorsal fin is quite unique in shape, number of nicks and scar patterns, much of our research work is based upon repeat observations of individually-recognisable Risso’s dolphins. This provides data for a range of long-term studies on the abundance, site fidelity, home range, social structure and behaviour of this species in Welsh waters. 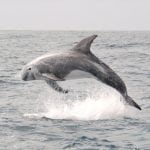 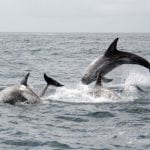 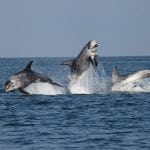 Driven by conservation initiatives, the long-term research objectives of our research aim to:

Ongoing studies allow us to focus conservation measures in relation to human activities in this area (e.g. renewable energy installations, by-catch reduction, disturbance by shipping, tourism etc); identify times and areas of special significance in the life cycle of these animals, such as breeding periods and nursery areas for example; and to measure the effectiveness of current management and action plans, assisting in their future development and subsequent implementation.

Find out more about Risso's dolphins in our species guide.