The bottlenose dolphin is a cosmopolitan species inhabiting  both tropical and temperate oceans.

Although the species is considered in general to be ‘safe’, some regional and local populations are certainly at risk of disappearing. This seems to be the situation for bottlenose dolphins off the coast of Argentina with recent studies showing low total abundance.

There are two genetically and morphologically distinct coastal populations of bottlenose dolphin to be found in Argentinean coastal waters although since the 1990s, sightings have decreased drastically along the entire coastline and today they are mainly concentrated in Northern Patagonia.

Since 2011, WDC has been supporting research and conservation activities in the Río Negro Estuary in Northern Patagonia undertaken by Fundación Cethus. Research includes visual, acoustic and stranding’s surveys as well as an educational programme.

Using photo-identification, 17 individual dolphins have been catalogued at Rio Negro estuary by our team with 12 of them observed approximately 200km west at Bahía San Antonio by another research team. 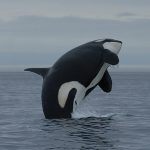 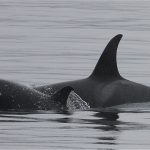 The project aims to reduce threats to bottlenose dolphins and their habitat, develop sustainable management measures and protect this environment for future generations. To do this we need to: