Dolphins live amazingly complex lives under the sea. Uniquely adapted for the ocean environment, they inhabitat both coastal waters and the open ocean. They are even found in some of the large river systems in Asia and South America. So what is life like for a dolphin?

Dolphins give birth to a single baby; the baby is usually born tail first (unlike most mammals) to minimise the risk of drowning. The birth can take a couple of hours.

The newborn dolphin is fully dependent on his or her mother and suckles thick paste-like milk from her nipples until he or she is able to catch fish.

Bottlenose dolphins living in Sarasota, Florida first give birth when they are 6-13 years old, but most often they are about 8 years old.  Dolphins virtually never have twins; they give birth to one baby at a time every 1 to 6 years depending on the species and individuals. The average time between babies for bottlenose dolphin mothers is 2 to 3 years. The fish-eating resident orcas only have babies every five years or more.

Do dolphins have belly buttons?

How long do dolphin mothers feed their babies milk?

Although dolphins have been documented nursing their offspring for up to ten years after birth, most dolphins feed their babies milk for 2 to 3 years. Dolphin milk is extremely rich and fatty compared to human milk or cow's milk, and dolphin babies grow quickly. Guided by their mothers, young dolphins can also begin to eat a few little fish when they are only a few months old. Over a period of years, young dolphins learn to catch fish on their own, and they drink less of their mother’s milk. A dolphin mother will always wean her youngster before she gives birth to another baby.

When can young dolphins hunt their own fish?

In Australia, young bottlenose dolphins can be seen eating small fish by about 4-5 months of age (they are still dependent on their mother’s milk though). Young dolphins often use a technique that scientists call "snacking" where the calf rapidly swims belly-up just under the water surface and traps tiny fish between the surface and air.

How long do baby dolpins stay with their mothers?

Bottlenose dolphin youngsters stay with their mothers until they mature at between five and ten years old. All dolphin mothers are brilliant teachers and invest a great deal of time and energy preparing their youngsters carefully for independence. They teach them how to find and catch prey, how to avoid dangers and find their way around their home range. They also learn important social skills from their mothers, including how to safely and appropriately interact with other dolphins. 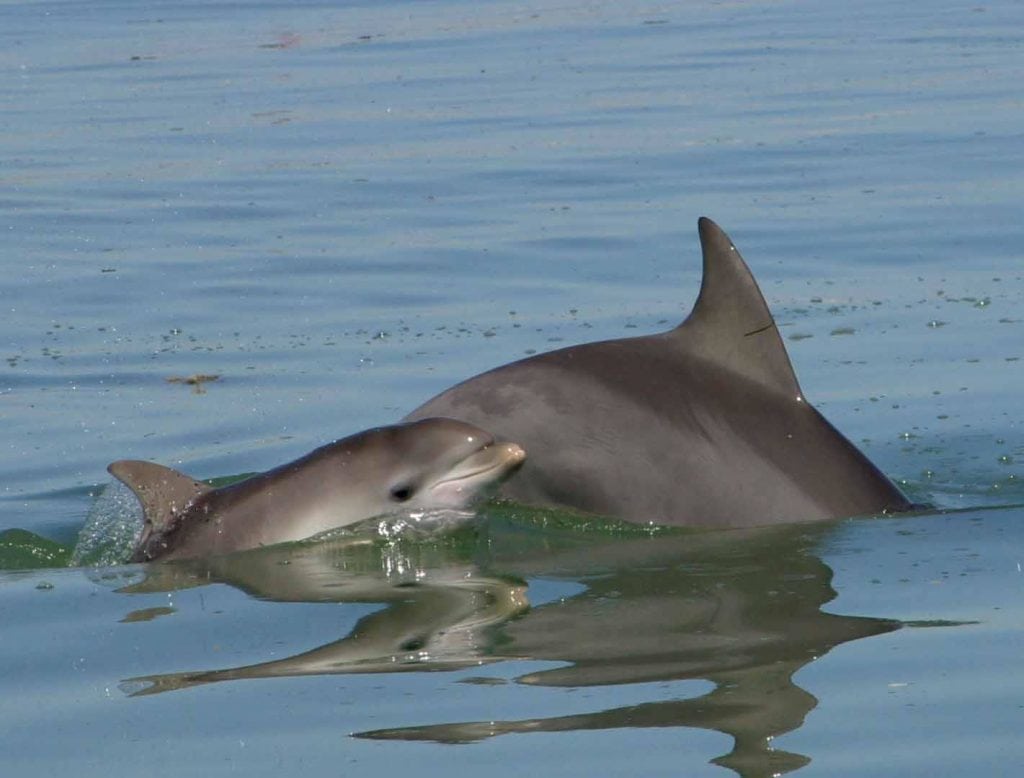 How many teeth do dolphins have?

Most dolphins have equal-sized conical shaped teeth in both upper and lower jaws (porpoises’ teeth are spade-shaped) perfect for grasping fish and squid. Like most mammals, newborn dolphin teeth are still embedded in the gums. Their teeth will start erupting in the first 5 weeks of life.

Dolphins have one set of teeth to last their whole lifetime and the number of teeth varies considerably from species to species. The long-beaked common dolphin has more teeth than any other dolphin with up to 240. Risso’s dolphins have the fewest; they have between 4 and 14 teeth in their lower jaw only. Risso’s favourite food is squid which they suck into their mouths. Amazon River dolphins (botos) have between 100-140 teeth and uniquely they include molar shaped teeth at the back as well as the conical ones at the front. Botos have a particularly varied diet including more than 40 fish species as well as crabs, snails and even turtles which they crunch using their molars!

Bottlenose dolphins have between 80 and 100 teeth.

Although all dolphins are equipped with teeth not all species use their teeth for eating prey or tearing flesh. Most use their teeth to grab, grip and secure prey and then swallow it whole—head first.

The age of a dolphin can also be estimated by looking closely at a cross-section of a tooth. Dolphins only have one set of teeth and their teeth continue to grow a little bit each year. Like the growth rings in trees, dolphin teeth have annual layers that can be counted to estimate the dolphin’s age. 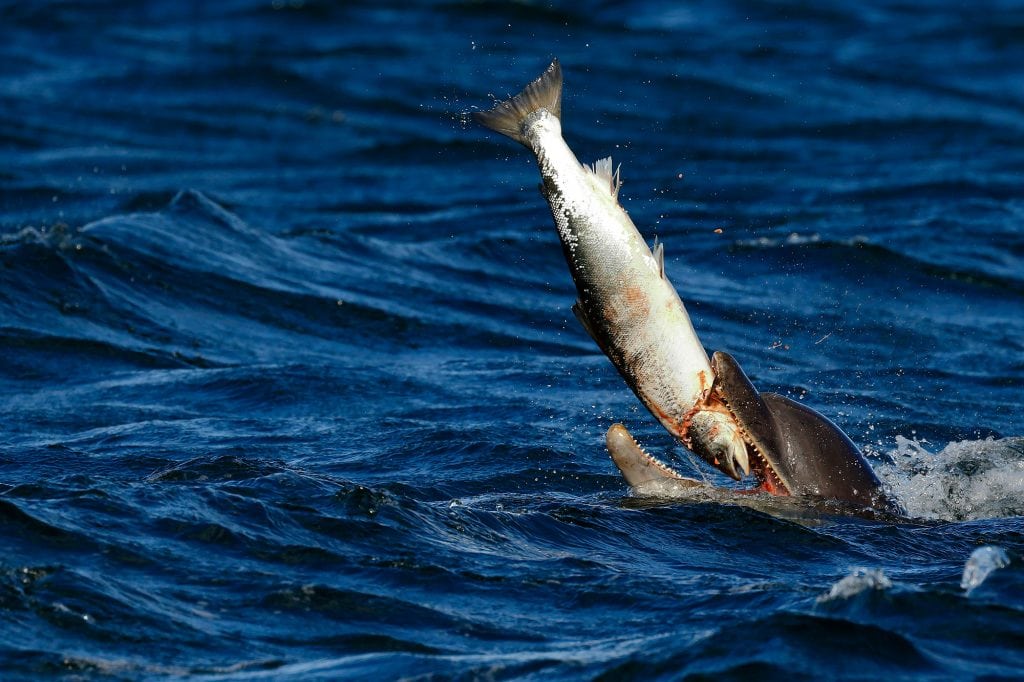 What do dolphins eat?

Dolphins are skilled hunters; their favourite food includes fish (such as salmon, cod, mackerel, seatrout, mullet, and herring), octopus and squid. Dolphin species will often specialise in eating types of fish or squid commonly found where they live. The largest dolphins (orcas and false killer whales) can hunt larger prey such as sharks, seals and even large whales.

Dolphins hunt cooperatively in pairs or groups which increases their chance of success and minimises their risk of being hurt. They may, for example, circle a school of fish, forcing them into a bait ball, and then they take turns darting in and grabbing a fish one by one. While hunting fish some dolphins will also use their tail to hit and smack the fish which temporarily stuns and paralyzes them long enough to allow the dolphins to attack them as they lay defenceless.

Dolphins living in coastal areas and rivers may chase fish into shallow waters or river banks where they can get the fish into a small narrow corner against a mud bank, ship or wall so that the fish become trapped and have no way to escape while the dolphins move in and attack them.

Dolphins do not drink the salty sea water most of them live in. Like us, dolphins need water to stay hydrated and healthy and most of this comes from the food they eat which contains a lot of water; fish and squid. Dolphins are good at holding onto the water they get from their food as they do not sweat like we do and their kidneys are adapted to conserve as much water as possible.

Dolphins use echolocation (or sonar) to help them navigate and sense their surroundings and for hunting. They send out a stream of echolocation clicks which are produced just below the blowhole and are emitted through the fatty melon (forehead).

The sound bounces off objects and return as echoes which are read and computed as pictures. Dolphin sonar is a precision tool that is able to detect quite remarkable details about the size, shape, and texture of objects.

Human-made sonar devices, such as those used to locate submarines, work on the same principal, but are not as sophisticated as dolphin sonar/echolocation. 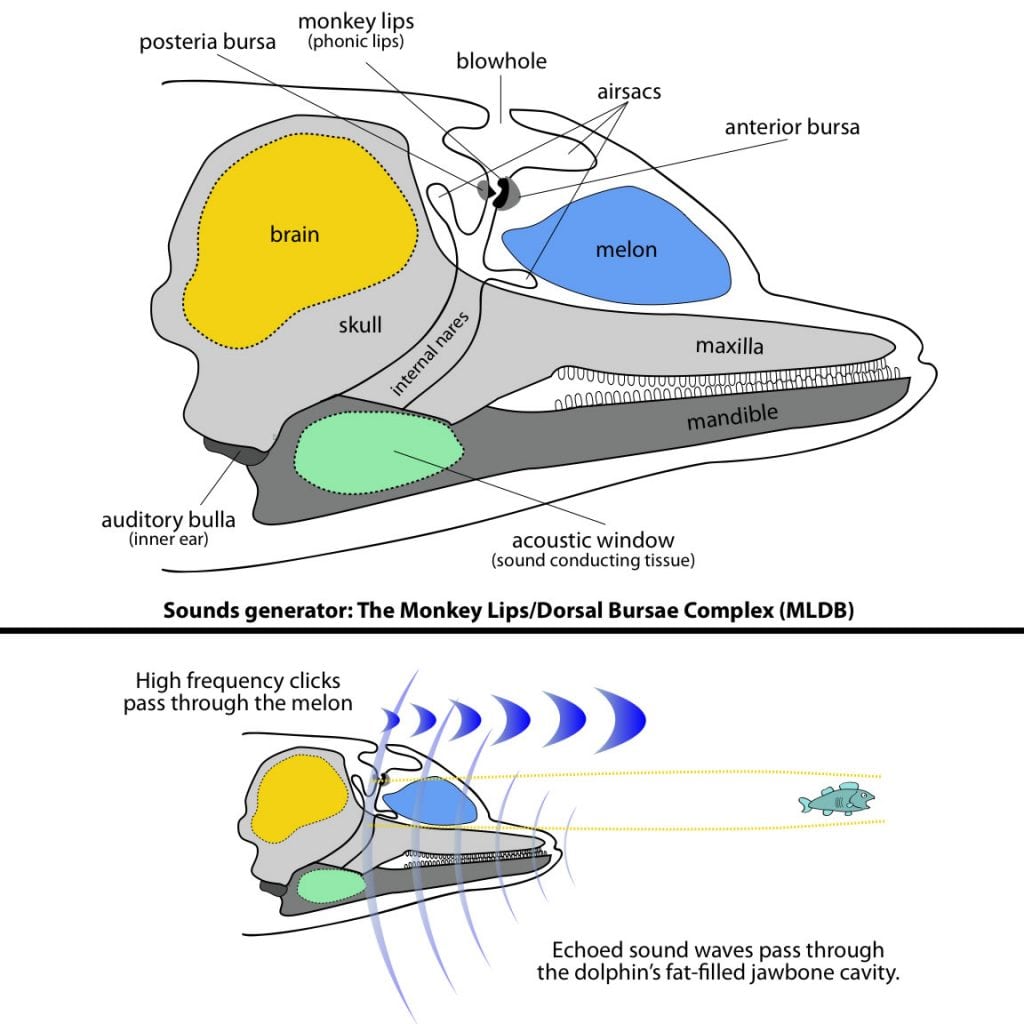 What sounds do dolphins use to communicate?

Dolphins are highly social mammals, like us! They communicate with one another using vocal sounds and body language (visual signals) such as tail slapping, flipper slapping and leaping into the air.

Sound travels much faster and further in water than light does and so dolphins can use sounds to keep in touch with one another even when they can’t see on another.

Dolphins do not form words as humans do, they use whistles and other sounds to communicate with one another in their own language. They make two main kinds of sounds; “clicks “and “whistles”. Clicks are used for echolocation purposes (see below), whistles are used to communicate with one another and interact socially. This vocal communication helps dolphins exchange information with each other, recognise individuals and to help organise and coordinate their activities such as cooperative hunting.

Scientists have discovered that each bottlenose dolphin has a unique whistle called a ‘signature whistle’, which is similar to a name. Dolphins use these whistles to announce or identify themselves. A mother dolphin whistles constantly to her baby for several days after birth, teaching them their individual whistle (name).

Resident orca pods share a unique set of calls, called a dialect, which helps them stay together. Vocal communication is extremely important amongst orca communities and seems to play an important role in keeping everything friendly and informed.

How long do dolphins live?

Dolphins can live for a very long time and females tend to live longer than males. Female bottlenose dolphins have been known to live for more than 60 years and dolphins up to 48 years old have given birth.

The oldest known dolphin is a bottlenose dolphin named Nicklo by researchers studying dolphins in Sarasota Bay in Florida. Nicklo was photographed in 2016 when she was 66 years old – the research team has known known her since she was born. The second oldest was a female called Blacktip Doubledip who was last seen in 2016 when she was 62 years old. Male bottlenoses can live into their 40s. A male named Jimmy Durante was 50 years old when he was last seen in 2009, and another was 51 years old when observed in 2014.

Sometimes dolphin researchers know how old a dolphin is because they have observed him or her since they were a teeny-weeny newborn baby and watched them grow up.  For example, WDC Adopt a Dolphin Field Officer, Charlie Philips knows that ‘Charlie’ the bottlenose dolphin living in the Moray Firth, Scotland is 11 years old, his mum, Kesslet, gave birth to him in 2007. He also knows that a bottlenose dolphin named Splash gave birth to her son, Sundance, in the Moray Firth in 1990 which means that Sundance is now 28 years old.

How do dolphins sleep?

Sleep is important to dolphins as it is for all mammals. Dolphins do sleep, but in a very different way to the way we do.  Unlike us, dolphins are not able to lose consciousness while sleeping; their breathing is under voluntary control and so part of their brain must stay alert to trigger each breath they take (they think about when to breathe).

Dolphins allow one half of their brains to sleep at a time; the other half stays alert to enable them to continue breathing and look out for any danger. So dolphins are never unconscious but they do get the rest they need.

Sometimes, dolphins will hang motionless at the surface of the water during sleep, while other times, they may swim slowly, close to the surface and breathing regularly. Young dolphins rest, eat and sleep while their mother swims, towing them along in her slipstream.

How long can dolphins hold their breath for?

Adult dolphins can stay under the water for up to 20 minutes. Most dolphins do not dive for such long periods of time or very deeply. Many bottlenose dolphins live in fairly shallow water and typically stay down for 2-3 minutes between dives.

Do dolphins have hair?

All mammals have hair at some point in their life and dolphins are no exception. Dolphins have a few whiskers around their snout in the womb and when they are first born but they soon lose them. Amazon River dolphins (botos) keep these hairs into adulthood - they are sensory hairs and thought to help them search for prey on the river bed.

Please help us save dolphins