The pygmy beaked whale was only classified as a distinct species in 1991.

The pygmy beaked whale has a slender, spindle-shaped body, a small head, curved mouthline, narrow, sloping forehead and slightly bulging ‘melon’ (top and front of the head). The small triangular dorsal fin is a distinctive feature of this little whale with a broad base and set well back on the body.  Some have even likened it to the petite dorsal fin of a harbour porpoise. The head and upper body of females and juveniles is dark olive-brown to grey-brown, while the belly and lower flanks are whitish-grey. Adult males have similar colouration, with the addition of a wide, slanting light brown or whitish band around the body between the head and dorsal fin and extensive scarring on the upper body. Males also have a more developed melon and more strongly curved jawline, with two teeth ‘erupting’ at the apex of the arch, mid-way along the jaw. Females and young may be confused with other beaked whales with overlapping ranges, however males can easily be distinguished by their two-tone colouration, small body size, and triangular dorsal fins.

Not much is known about the behaviour of pygmy beaked whales as they have rarely been encountered in the wild. However, confirmed sightings have found them almost always in pairs, or small groups of only a few individuals. As with other beaked whales they are considered to be an oceanic species with a preference for deep-water.

Where do Pygmy beaked whales live?

Although a stranded specimen was found on a beach in New Zealand, the range of pygmy beaked whales is considered to be restricted to the eastern Pacific Ocean from central California to northern Chile.

What do Pygmy beaked whales eat?

Like other beaked whales and other deep divers, they are thought to feed primarily on squid, although some smaller fish species and shrimp may also be taken. 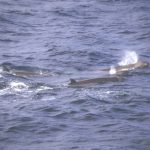 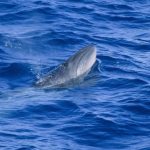 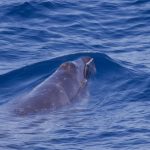 You can help save Pygmy beaked whales...

By supporting WDC, you can help Pygmy beaked whales to live safe and free. Together, we can: