Short-finned pilot whales have been nicknamed as the “cheetahs of the deep sea” for their deep, high-speed, sprint-dives to chase and capture large squid.

Pilot whales are extraordinarily social; their strong bonds motivate  them to stick together through thick and thin, even when that means putting themselves at risk.

Pilot whales have a very sociable and inquisitive nature. They live together in extended family pods which are tight-knit and stable. The males and females within each pod are related to one another and mating takes place outside the pod.  Baby pilots grow up in the safety of the pod they are born into. Pilot whales put a lot of energy and effort into maintaining their relationships. They are long-lived whales; females live longer than males and females go through menopause. Once older females stop having babies themselves, they help other mothers in their pod care for their babies.  Pilot whales are strongly bonded to each other and do everything together; resting, hunting, socialising, playing and travelling as a unified pod. The most important thing in their lives is each other, and they are incredibly loyal. Pod sizes vary between 10 and 50. Huge multi-pod get-togethers of hundreds or even more than a thousand pilot whales, give ample opportunity for males to mix and breed with females from other families.

Females have calves every 5 to 8 years. Older females do not give birth as often as younger females. Each pregnancy lasts for about 15 months and then the mother will nurse her baby for at least two years, often longer, as the age gaps between her babies are 3 to 6 years. Nursing can last for as long as 15 years if the mother does not go on to have another baby. The bond between a mother and her offspring are very strong and last until the mother dies.

Pilot whales are often active at the surface; they may spyhop (poke their heads out of the water), or lobtail (lift their flukes out of the water and splash them down). They are also regularly seen (logging) resting in unison, close to one another at the surface. Sometimes they will approach vessels moving at slow speeds and will often allow slow-moving whale-watch boats to approach them.

What do short-finned pilot whales eat?

Pilot whales will catch and eat fish such as mackerel, hake, herring and cod but their favourite prey, by far, are squids and octopuses. Their squid-eating habit is evident when looking inside their mouths as they have far fewer teeth than dolphins that prefer to grab and eat fish. Pilot whales ‘ram and suck’ squids and octopuses and so their mouths are adapted for sucking rather than grasping prey.

Pilot whales can dive to depths up to 1000m for 10 to 16 minutes at a time. They mostly feed at night in deep water using echolocation to find prey. They have been recorded swimming very quickly at depths, sprinting after large squid and have been aptly nicknamed ‘cheetahs of the deep sea’.

Where do short-finned pilot whales live?

Why are they called pilot whales?

Pilot whales get their name from an old theory that the pod was ‘piloted’ by a single leader - we now know this is not the case, but the name has stuck. Pilot whales are actually large dolphins; they are the second largest member of the oceanic dolphin family (second only to orcas in size). 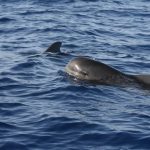 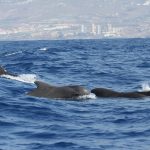 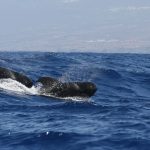 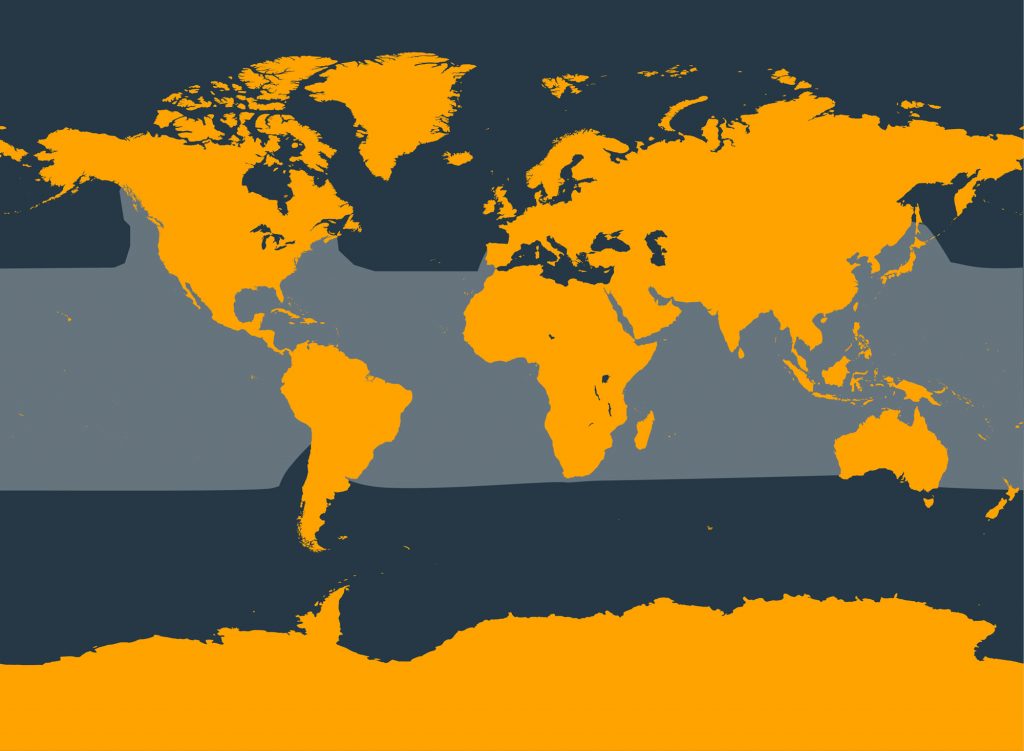 Sadly, perhaps the thing that pilot whales are most famous for is their tendency to mass strand on beaches . The whales often appear to be healthy and we are sure that the strong bonds between them and their propensity to stick together and follow one another plays a big role in these stranding events, whatever the underlying reasons might be. Possible causes are navigation mistakes when following prey or travelling (perhaps due to irregularities in the magnetic field), or possible parasitic infections resulting in neurological disorders, or perhaps the whole pod simply sticks together to support an ill whale.

When human helpers are able to refloat whales returning them to sea, many will return to the beach for a second time. It is likely that the whales’ strong bonds causes refloated whales to return to shore if others of their group remain in distress.  Refloating stranded whales has to be carefully managed to ensure whales leave the beach together, or in large enough groups to offset the impulse to return.

Pilot whales are large oceanic dolphins; they and other large members of the dolphin family such as orcas, false killer whales and melon-headed whales are also all known as ‘blackfish’.

Other close living relatives of the pilot whales include the pygmy killer whale and Risso's dolphin.

They are also often seen swimming with oceanic dolphins in mixed-species pods.

You can help save short-finned pilot whales...

By supporting WDC, you can help short-finned pilot whales to live safe and free. Together, we can: